Every child looks forward to summer, but when temperatures soar, even happy kids can start to feel oppressed by the heat and humidity. Boredom sets in. Their physical activity levels decline as TV and computer time goes up. Break that cycle and splash away the blues with fun and games in the pool!

We scoured the Internet for exciting pool games and chose 10 that represent the wide range of activities suitable for toddlers through teens. But first, a few rules and safety precautions are in order.

1. Station an adult at each end of the pool and ensure their eyes remain on the action at all times. The more kids in the water, the more adults required on deck.

4. Let little ones have play time without older kids as they may still be developing skills.

5. Know each swimmer’s skill level before putting them in the water.

We’ve divided the list by individual or group competition and put them in alphabetical order.

This is a great way to teach balance. Float a big air mattress in the water. Let kids take turns standing up straight while someone keeps time. No pushing or interference allowed! Reward the one who stays upright longest.

The object is to race to the far end of the pool while pushing a balloon with your nose. You’ll need one balloon per swimmer, filled with about 1/3 cup of water, then blown up and knotted. (The water weights the balloon just enough to keep it from blowing away.)

Have kids line up at the shallow end of the pool, then hand each a dry sheet of newspaper. On cue, everyone enters the water and starts swimming while holding their paper above the water. The goal is to deliver the driest paper to the other side, which isn’t easy because of all the splashing.

For this game all you need are a bunch of blown-up balloons and lots of players (the more players, the more balloons). Disperse balloons and players in a shallow pool. Competitors try to grab and hide as many balloons as possible under their bodies. Whoever has the most balloons wins.

Players join hands to make a large circle in the water.  Someone floats a ball inside the circle, and the goal is to not let the ball touch you. Don’t break the circle! If a person touches the ball, he is out and the remaining players make a smaller and smaller circle until only two are left.

Have racers line up on rafts at the pool’s shallow end. The monitor sounds the whistle, and players take off, kicking or paddling the raft to the deep end and back. The first racer to touch the wall back at the shallow end wins.

String a rope across the center of the pool. Toss a bunch of floating balls (ping pong, playground balls, beach balls) into the pool, putting an equal number on each side of the “net.” Put teams on opposite sides of the net. When the whistle blows, players try to throw all their balls on the other side of the rope. When the whistle blows a second time, everyone stops, and the team with the fewest balls on their side wins. Note: youngsters and teens can play together if you put the teens in the deep end and little ones in the shallow end.

Create two teams. Each forms a line in the shallow end. The player at the front of each line passes a ball over his head to the player behind him, who then passes it under his legs to the next person. That person passes the ball over his head and so on. When the ball reaches the last person, that person swims to the front of the line and begins passing again. The first team to return to their original order wins.

Assemble a variety of objects that will sink — two of each (one for each team) — such as dive rings, spoons, coins (pool-safe objects only). Make a list of the objects. Create two teams and give each team the list. Strew the items around the pool. The team that collects the most items from the list in the allotted time wins. 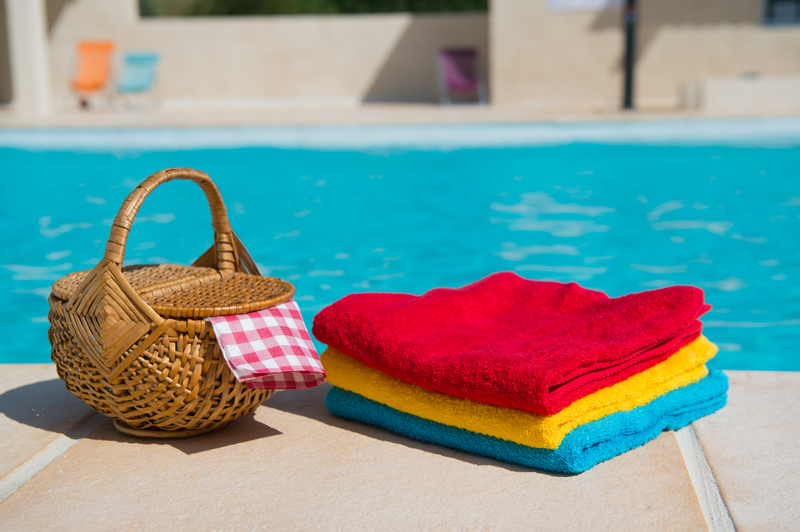